Born and reared in Los Angeles, Craig Anderson graduated from Eagle Rock High School in 1959 and was awarded the Distinguished Alumni Soaring Eagle Award in April 2018. He then attended Valparaiso University graduating in 1963 majoring in English and history with a minor in philosophy.  Following college, he received his draft notice, was selected to attend Officer Candidate School at Ft. Benning, Georgia, and upon being commissioned served for two years on active duty as a Lieutenant at Ft. Ord, California where he was a Rifle Range Instructor, taught bayonet and hand-to-hand combat and was made an Executive Officer for a BCT Company.

Following his release from active duty he was employed by the Procter and Gamble Company in marketing management. After a series of promotions, he met Liz Johnston, and shortly thereafter they were married at The Episcopal Church of The Transfiguration in Evergreen, Colorado. In 1972 he sensed a call to ministry and priesthood in the Episcopal Church (The Episcopal Church is one of 39 provinces of the world-wide Anglican Church which is the second largest Christian body in the world with over 80 million members).  As a Postulant for Holy Orders from the Diocese of Colorado, he attended seminary at The School of Theology, The University of the South, Sewanee, Tennessee, and received his M.Div. with honors.  During his seminary education he was awarded the Woods Leadership Award and served as Editor of the St. Luke’s Journal of Theology.  He was ordained to the diaconate in 1974 and the priesthood in 1975.  He went on to receive his M.A. and Ph.D. in Theology from Vanderbilt University where he was a Hartmann Graduate Fellow and teaching assistant. During his seminary and graduate school education he fulfilled his military reserve obligation as an Instructor and Company Commander at The U.S. Army Reserve Center in Chattanooga, Tennessee. Following his ordination to the priesthood, he was asked to branch transfer from the Infantry to Chaplaincy and subsequently served as a Reserve Chaplain with the 115th Field Artillery Battalion in Winchester, Tennessee.

Dr. Anderson taught at The School of Theology of the University of the South and held the C.K. Benedict Chair of Theology from 1978 through 1984.  During his tenure there, he was head of the Admissions Committee and chaired the Senior Program. He also served as Priest-in-Charge at Christ Episcopal Church in Alto, Tennessee, part-time on a non-stipendiary basis.

In March of 1984, The Episcopal Diocese of South Dakota elected him to be the eighth Diocesan Bishop.  He was consecrated at Our Lady of Perpetual Help Roman Catholic Church in Rapid City by the Most Reverend John Allin. Prior to his Consecration, Bishop Anderson was adopted by the Oglala Tribe of the Pine Ridge Reservation and given the name “Wanbli Tokaheya” (Leading Eagle) at the 112th Niobrara Convocation, a gathering of the eighty Episcopal Lakota, Dakota and Nakota churches on the eight reservations in the Diocese. During his nine years as Bishop of South Dakota, he concentrated on ecumenical ministry, indigenous ministry with an emphasis on raising up Lakota persons for ordained and lay ministry and ordaining women to the diaconate and priesthood. He continued his ministry as a military chaplain for the South Dakota Military Academy and was later appointed South Dakota National Guard State Chaplain.

In recognition of his work combating institutional racism in the South Dakota, Bishop Anderson received the Governor’s Award for Reconciliation in 1990 and 1991 and was awarded the Sacred Hoop Peace Medal in 1991 by the Great Sioux Nation.  Valparaiso University awarded him the honorary Doctorate of Humane Letters for his work in the area of human rights and ecumenism, and he received an honorary Doctorate of Divinity from the University of the South for his leadership as Chair of the Episcopal Church’s National Committee for Indian Ministry and his scholarship and teaching in the area of theology and the behavioral sciences. He was awarded a Mershon post-doctoral fellowship at The Ohio State University for research and teaching in the area of public policy and theology for the academic year 1992-1993. He served concurrently as an Assisting Bishop of the Diocese of Southern Ohio.

From 1993 to 1998 Bishop Anderson served as the eleventh President, Dean and Professor of Theology at The General Theological Seminary in New York City, the oldest and largest seminary of the Episcopal Church, where he founded the College for Bishops and served as Assistant Bishop of the Diocese of New York. He was a Fjellstedt Fellow at Uppsala University in Sweden for the spring semester of 1997.

In 1995 Bishop Anderson was elected President of the National Council of Churches (the largest ecumenical body in the United States representing 38 major denominations of more than 45 million persons) and served as President elect, President and Past President from 1995-2001 and provided leadership in linking the NCCC with the Conference of Catholic Bishops and leaders from Reformed and Conservative Judaism.  He was also the Episcopal Church’s representative to the World Council of Churches’ Ecumenical Decade.

While President of the National Council of Churches and President of the General Theological Seminary in New York, Chaplain Colonel Anderson was selected to be on the faculty of The United States Army Chaplain’s School as a reservist to teach aspiring chaplains military subjects given his background as an Infantry officer, and graduate of The United States Army War College at Fort Monmouth, New Jersey. Colonel Anderson was inducted into the United States Infantry School Hall of Fame in 2018.

In the fall of 1998 he was installed as the eleventh Headmaster of St. Paul’s School in Concord, New Hampshire. While Headmaster and Rector, he continued his Episcopal ministry and served as Interim Bishop in the Diocese of Vermont. During his tenure at St. Paul’s, he oversaw the restructuring of the science and mathematics curriculum and developed an integrated humanities course of studies program to include a character curriculum in conjunction with the daily Chapel program. He also served as President of the School Year Abroad Program.

Following his retirement from St. Paul’s School in 2005, he served for a year as an Assistant Bishop in The Diocese of Idaho and interim Rector of St. Thomas Church in Sun Valley, Idaho. The Andersons then moved to Orcas Island, Washington where Bishop Anderson was the part-time, non-stipendiary Rector of Emmanuel Episcopal Parish on Orcas Island and was an Assistant Bishop in the Diocese of Olympia from 2007 to 2014. He was a Board member of the Orcas Island Community Foundation. For his work in the area of conservation and environmental stewardship he received the San Juan Islands Environmental Stewardship Award.

In 2014 Craig and Liz moved to Taos, New Mexico where, as a retired Bishop, he helped in the Diocese of the Rio Grande. Both Craig and Liz were active in various environmental organizations to include the Western Environmental Law Center, Taos United and Amigos Bravos. They were also active in support of the arts and were members of the President’s Council for the Taos Center for the Arts, The Taos Chamber Music Group, The Harwood Museum and The Taos Art Museum.

In addition to their home in Taos, the Andersons spent four months a year on their farm in western Minnesota. In 2005 Bishop Anderson put cropland on the farm into a conservation program (CRP) and restored thirty-seven native grasses and flowers to three hundred acres. He also entered a rotational grazing conservation program GRP for the roughly two hundred head of Black Angus that graze on the remaining 200 acres. He has provided an easement for the Fish and Wildlife Department to help manage the conservation programs. The Andersons actively support and promote The Big Stone National Wildlife Refuge, Minnesota Center for Environmental Advocacy, CURE (Clean Up our River Environment), Trout Unlimited and are lifetime members of Pheasants Forever. Bishop Anderson is currently writing a book on the relationship between ecology and theology given his longstanding interest and scholarship in the relationship of philosophy of science and philosophy of religion.

Bishop Anderson has been an active member of the Council on Foreign Relations in New York since 1994. Under President Clinton, he was a member of the President’s Commission on White House Fellowships and served with other national denominational leaders as an advisor to the President. He also was a member of a Presidential Delegation to observe elections in Haiti in 1996. During the same year, Bishop Anderson traveled to Russia, at the invitation of the Patriarch of the Orthodox Church of Russia, with three other military chaplain-bishops to help restore the chaplaincy to the Russian Armed Forces.

Bishop Anderson was a member of the Harvard Business School Board for Social Enterprise from 1998 to 2005. He has also chaired or served on the following Church boards and community organizations:

Over the past forty-seven years he has been a consultant, retreat leader, guest lecturer, graduation speaker and scholar-in-residence, interim priest, pastor and bishop in the United States and in Europe, Asia, South America, Russia, Scandinavia and Africa.

Looking to simplify and downsize, the Anderson sold their house in Taos and moved to Craig’s ancestral home in Minnesota. In addition to his environmental involvement and caring and working on his farm, he recently served as a 7 month interim as a pastor in three ELCA congregations located in Appleton and Madison, Minnesota, in his capacity as a “rostered bishop and pastor” in the ELCA Southwest Synod. He will also continue to assist in the Episcopal diocese of Minnesota.

He is married to Lizbeth Johnston Anderson, a native of Denver, Colorado. She is a graduate of the University of Denver and holds a Master of Science degree in Urban Planning from the Graduate School of Architecture, Planning and Preservation at Columbia University. She has taught math and art at St Andrew’s School in Sewanee, Tennessee and was a librarian at the Dalton School in New York City, interim editor of the Sewanee Messenger, and has worked as an interior designer in both residential and institutional projects.

The Andersons have three children and six grandchildren. Their son Court, a writer, and his wife Phoebe, a managing director at Morgan Stanley, live in New York City and have two daughters.

Their daughter Megan, an environmental attorney and Associate of the Regulatory Assistance Project, currently resides in Brussels, Belgium, where her two children attend a Dutch school.

Their youngest daughter, Ragnar, and her family live in Wellington, New Zealand where her husband is Assistant Dean and Professor in the School of Architecture and Design at Victoria University where Ragnar teaches public health and is completing her PhD. They have two young children. 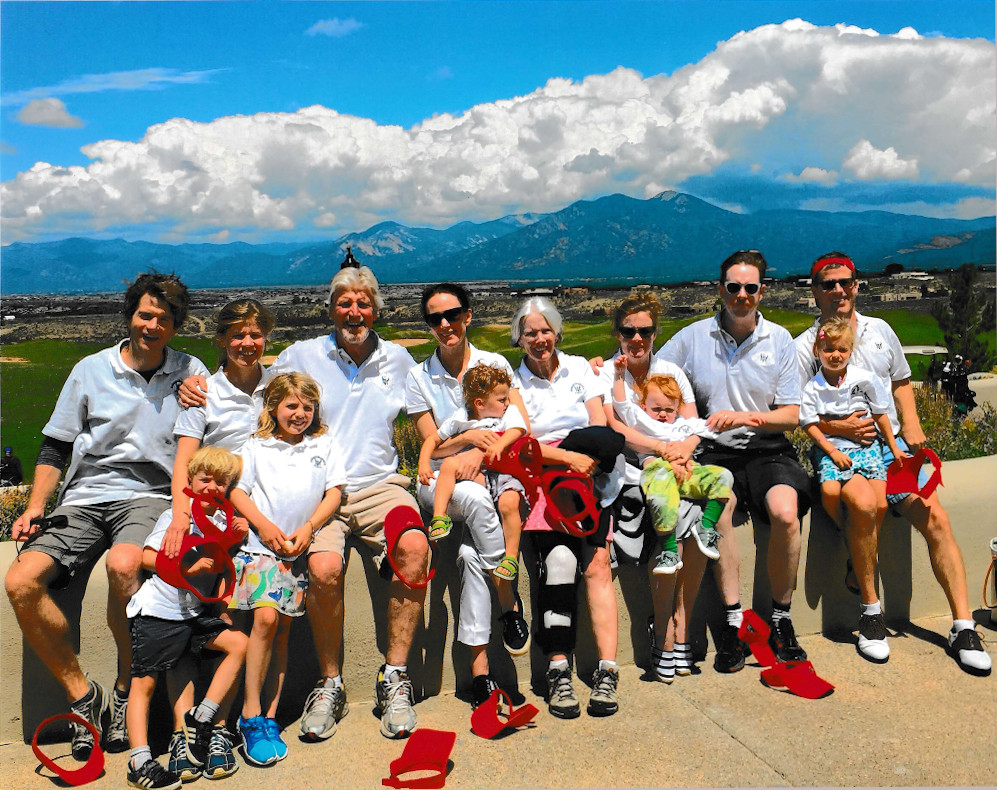