Bishop Craig Anderson knows what it’s like to wear many different hats.  Last night, he was officially installed as the new rector of St. Paul’s School, he wore a plump velvet ecclesiastical hat befitting the pomp ceremony.

But far from the candle smoke and organ chords of the St. Peter and St. Paul Chapel, where students, faculty and staff gathered for Evensong last night, Anderson has donned vastly different garb.

In 1994, as bishop of the diocese of South Dakota, he dressed in a Native American headdress and danced a tribal dance to become adopted into the Ogalala tribe.’

During his nine years in South Dakota, Anderson learned the importance of blending with his community so much so, that he took it upon himself to learn the language of the Lakota people.

Now, Anderson, who last served as president and dean of the General Theological Seminary in New York City, is carrying that philosophy to St. Paul’s. 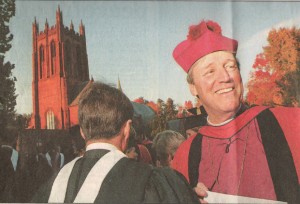 The eleventh rector of St. Paul’s School, The Right Rev. Dr. Craig B. Anderson, waits outside the chapel for his searing-in. Photo - Dan Habib

He initiated Evensong, the one hundred-forty-year old school’s first official installation ceremony, as a vehicle for that belief.

“This is a welcoming,” he said. “I hope we’ll have fanfare and lots of fun.”

The welcome went beyond the 500 students and 250 faculty, staff and employees of the school.  Anderson, who was chosen by the board of trustees as the school’s 11th rector in February and began duties in July, invited members of the community, including Concord mayor, Bill Veroneau and several public school officials.

“I want to deal with how we can be better neighbors,” Anderson said in an interview yesterday.  One of his primary goals as rector, he said, is to draw stronger ties between St. Paul’s and the outlying community.

Amid the formal recitations and ancient hymns of last night’s Episcopal ceremony there were glimpses of that goal.

“You are an Episcopal bishop,” said Rev. Douglas Theuner, bishop of New Hampshire, as he escorted Anderson, the first bishop ever to serve as rector of the school, to his stall in the chapel.   “But the community that you serve is much broader.”

As Anderson installed new faculty members, staff and trustees, the message was the same. “May God bless you in this endeavor and sustain you with his grace in all that you do here as stewards of our common work.”

During the ceremony, Anderson knelt and delivered a prayer of humility and acceptance of his new ministry.

He intends to carry that humility into his everyday duties.  “I plan to spend the first year listening and learning….I don’t come with an agenda,” said Anderson, who holds the rank of colonel in the U.S. Army Reserves and serves as the Episcopal church’s representative to The World Council of Churches’ Ecumenical Decade.

Anderson has already held six full-day retreats with faculty, staff and students to learn more about the school he now heads.  He has distributed a four-question survey to the entire student and faculty body.  In it, he asks for three perceived strengths of the school, three pressing problems, three important issues and opinions on how to properly govern the school.  After he has gathered the answers, he plans to formulate a mission statement for the school and develop a five-year strategic plan.

Anderson’s leadership comes on the heels of a struggle within the school.  A year and half ago, the school’s last rector, David Hicks, resigned following a three-year tenure, amid criticism from faculty, alumni and students about his management style.

With Anderson’s leadership, the school hopes to heal wounds left in the past.  “It’s a pretty dramatic change in leadership,” said Rick Cowan, director of communications at the school. “He is really a charismatic guy.  He seems to be connecting the students and faculty well.”

Cowan also recognized Anderson’s desire to be more involved with the world outside St. Paul’s pristine grounds.  “Bishop Anderson want to connect us with the Concord community more on many levels,” he said.

To highlight last night’s ceremony, the student choir sang a Latin choral introit, and the congregation joined in hymns, blessings and prayers.

Following Anderson’s installation with Bishop Theuner’s permission, the congregation broke out in applause and cheers.

The eleventh rector of St. Paul’s School, The Right Rev. Dr. Craig B. Anderson, waits outside the chapel for his swearing-in. Photo – Dan Habib