by Craig B. Anderson

Community is viable if it is the outgrowth of a deep involvement in a purpose which is other than, or above, that of being a community. – Bruno Bettelheim

Much of the self-congratulatory rhetoric regarding Christian community or the incessant quest for it betrays a felt lack of it within the Church and wider culture. Bettelheim’s intuition points to the fact that too much concern, too much talk about community is not only symptomatic of its absence but reveals a misunderstanding of its nature. 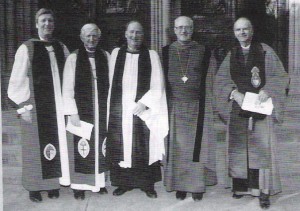 Contrary to a pervasive cultural understanding of community which is often taught in the Church, community is not something that can be created ex nihilo. Such hubris overlooks a central tenet of human being and Christian identity. Human beings don’t create community as much as they are created by it. Human being is by nature communal being. Community supersedes the appearance and disappearance of the individual. Accepting this fact of human existence is difficult in an age and culture that defines itself almost exclusively in individual terms.

Professor George Lodge of Harvard suggests that within the world today, there are two competing ideologies: individualism and communitarianism. Lodge states that the United States is one of the purist examples of individualism as an ideology that influences our country’s institutions, action and self-understanding. Too often such individualism results in an unhealthy narcissism and preoccupation with the self that leads to an idolatry of self.

Much of our concern for community, owing to a felt loss of it, is rooted in the misunderstanding of community as an aggregate of individuals in service to the individual. The roots of this misunderstanding can be found in the Hobbesian-Lockean concept of social contract/compact wherein communal or societal restraint is seen as a necessary evil for individual development and expression. Our worship of rugged individualism, the pervasive archetype of the hero in our collective unconscious and an imbalance in seeing health and well-being in individual therapeutic terms are ongoing manifestations of exaggerated individualism. The legal rights and privileges of the individual as more important than communal rights, responsibility and obligation exacerbate the problem.

In Habits of the Heart, Robert Bellah gives testimony against the imbalance of individualism over communitarianism in calling for a retrieval of a communal ethic and commitment to the common good. Josiah Royce expressed it earlier and with a certain eloquence, “Man, (sic) the social being, naturally and in a sense helplessly, depends on his communities. Severed from them, he has neither worth nor wit, but wanders in waste places, and when he returns finds the lonely house of his individual life empty, swept and isolated.”

My experience of Royce’s insight took place in South Dakota during my time and ministry there as Bishop. The Episcopal Church in South Dakota is unique in that the majority of churches and parishioners in this bi-cultural diocese are Lakota/Dakota/Nakota members of The Great Sioux Nation. Lakota understandings of human being and community have a different starting point and as such serve as a corrective to the persistent and pervasive rugged individualism and parochialism of our culture. Within Lakota culture communal identity is prior to and shapes individual identity born of a recognition that prior to me, there is a thee and Thou. The nation, the tribe, the band or community bestow identity, “worth and wit.” This notion is manifest in the word “Lakota” itself which translates as “allies,” “friends,” “the people.” A Lakota person’s identity is primarily relational, not individual. The tiyospaye, the extended family or community is the primary source of meaning. This is evidenced in the greeting used by politicians, tribal leaders, religious persons and any person in authority, Mitakuye owasin, a greeting which reminds the people who and whose they are and translates as, “we are all relatives,” “we are all related,” “we are all brothers and sisters.” Such relationship is definitive for a Lakota understanding of human being and extends to the “winged, finned and four-legged” relatives as well.

Within Lakota culture, one’s primary obligation is to and for the other and the Other prior to self-gratification and seeking. Community is recognized not as something that is sought or created by individual effort but as the very context or container of human being. As such, it is not an entity to be produced, but a gift that bestows understanding, humility and worth and brings with it a recognition of one’s place in the sacred circle.

The Lakota understanding of community also serves as a corrective for the Church. The parallels between Lakota culture and Hebrew culture are obvious: tribal identity, and the importance of being in relationship to include relationship with one’s ancestors. Tiyospaye when qualified by Wakan yields an understanding of the Church as community that more closely approximates the Greek koinonia, the peculiar kind of communion Christians have with God and one another in Christ experienced as agape and marked by mutual sympathy and concern for the other and Other over self.

Theologically, community as a gift realized in covenant is grounded in grace. Furthermore, community is the essential ingredient in a Christian doctrine of humanity or theological anthropology. It is an aspect of our being created in God’s image and likeness…”And God said, come let us create human being”…created as a community of selves, not roles that are “played,” but selves that act upon the individual both within and without.

Perhaps the insights of Bettelheim, Royce, Lodge, Bellah, and the Lakota people can serve as a corrective to the misguided notion of community that is all too commonplace in the Church, the idea that we, of our own efforts can create community. Rather we are called to a deep appreciation and humility in recognizing that community is the gift of God realized in Covenant. A faithful response is obedient answering rather than self-proclamation and self-definition. If so, perhaps we can restore a needed balance, a needed harmony as mitakuye owasin. In a different culture and time, Ludwig Feuerbach noted the grounding for such a corrective: “The individual man (sic) does not have the essence of man in himself as a moral or a thinking being. The essence of man is found only in the community, in the unity of man with man.” Feuerbach’s insight was captured more simply and beautifully by a Lakota woman, Zona Fills the Pipe, who, when asked by some well-meaning non-Indian Christians to share her story, spoke of her relatives and the Church. Impatiently, one of the younger listeners said, “But Zona, when are you going to tell us about yourself?” Quietly, with eyes cast to the ground, Zona responded, “You have not listened, I have been telling you about myself…”

Craig B. Anderson, the former Bishop of The Diocese of South Dakota, is currently President and Dean of the General Theological Seminary of the Episcopal Church in New York City.